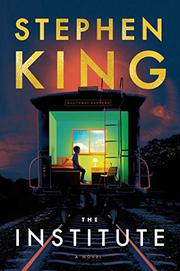 The master of modern horror returns with a loose-knit parapsychological thriller that touches on territory previously explored in Firestarter and Carrie.

Tim Jamieson is a man emphatically not in a hurry. As King’s (The Outsider, 2018, etc.) latest opens, he’s bargaining with a flight attendant to sell his seat on an overbooked run from Tampa to New York. His pockets full, he sticks out his thumb and winds up in the backwater South Carolina town of DuPray (should we hear echoes of “pray”? Or “depraved”?). Turns out he’s a decorated cop, good at his job and at reading others (“You ought to go see Doc Roper,” he tells a local. “There are pills that will brighten your attitude”). Shift the scene to Minneapolis, where young Luke Ellis, precociously brilliant, has been kidnapped by a crack extraction team, his parents brutally murdered so that it looks as if he did it. Luke is spirited off to Maine—this is King, so it’s got to be Maine—and a secret shadow-government lab where similarly conscripted paranormally blessed kids, psychokinetic and telepathic, are made to endure the Skinnerian pain-and-reward methods of the evil Mrs. Sigsby. How to bring the stories of Tim and Luke together? King has never minded detours into the unlikely, but for this one, disbelief must be extra-willingly suspended. In the end, their forces joined, the two and their redneck allies battle the sophisticated secret agents of The Institute in a bloodbath of flying bullets and beams of mental energy (“You’re in the south now, Annie had told these gunned-up interlopers. She had an idea they were about to find out just how true that was"). It’s not King at his best, but he plays on current themes of conspiracy theory, child abuse, the occult, and Deep State malevolence while getting in digs at the current occupant of the White House, to say nothing of shadowy evil masterminds with lisps.

King fans won’t be disappointed, though most will likely prefer the scarier likes of The Shining and It.