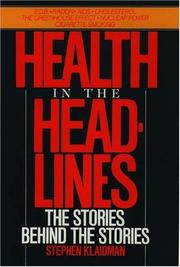 HEALTH IN THE HEADLINES

The Stories Behind the Stories

Is health-risk reporting hazardous to your health? Quite possibly, according to former journalist Klaidman, now a research fellow at Georgetown, who here casts a critical eye on how the news media have handled various health-risk issues. Following a general discussion of health-risk assessment for the lay reader, Klaidman devotes a chapter to each of seven hazards: the pesticide EDB, radon, nuclear power, global warming, AIDS, cholesterol, and smoking (why he chose these particular stories is not revealed). Among Klaidman's concerns are how and to what degree public policy is influenced by the news media, how journalism's zest for controversy polarizes complex issues, and how the media are manipulated by interested parties to achieve their goals. Klaidman does a workmanlike job of analyzing how each story developed and how its handling influenced public thinking and public policy. He closes each chapter with an assessment of the news media's performance, and end-of-chapter notes document his research on the coverage of each story. The final chapter sums up Klaidman's findings and offers the unsurprising conclusion that there is room for improvement in the reporting of health-risk stories. For the public, he prescribes a dose of healthy skepticism, cautioning readers/viewers to be aware of the tendency of the media to exaggerate risks to make a story more dramatic, to be alert to the economic and political motivations of those making claims and counterclaims, not to place trust in any single news source, and not to expect clear- cut answers to complex scientific questions. Perhaps to avoid an excess of journalistic zeal, Klaidman has produced a well-researched, but somewhat bland, collection of case studies that offer a glimpse behind the scenes and some advice on how to read between the lines.