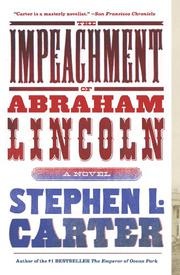 THE IMPEACHMENT OF ABRAHAM LINCOLN

Yes, the counterfactuals sometimes threaten to suffocate the real matters here; as Carter, who cheerfully admits to much invention, writes, “None of this was true, but all of it was in the newspapers.” The overriding counterfactuality here concerns a historical chestnut: Honest Abe warred on the Constitution when he suspended habeas corpus and effectively put the Union under a state of martial law. The act earned him the label of tyrant in his time—and in Carter’s pages, with pro-Confederate sympathizers and staunch Unionists alike rising up in protest. As Carter’s tale opens, Lincoln has indeed been assassinated—almost. Shot on Good Friday, he rises from the near-dead on Easter Sunday, Christlike. “Across the country, people cheered,” writes Carter, with much portent. “Those who felt otherwise kept their disappointment to themselves, content to bide their time.” Those numerous disappointed types include more than a few traitors and insurrectionists, some deep within the bowels of a government still riven by the late unpleasantness of the Civil War. But who are the bad guys, and who mere celebrants of the First Amendment? Since Lincoln is alive and well in Carter’s telling, it would be uncivil to ponder the implausibility of his choice of heroine, a young, fearless and brilliant African-American named Abigail Canner, who, fresh from Oberlin, is determined to expose the real engine driving the plot to turn the Great Emancipator out of office—and it’s not all the doing of the juicily bad character called the Lion of Louisiana, either. Fans of secret codes will enjoy watching the mind of Abigail’s legal-eagle sidekick at work, and Abigail herself makes for a grandly entertaining sleuth.

A smart and engaging what-if that has the virtue of being plausible—and the added virtue of not having been written by Bill O’Reilly, so that the real facts are actually facts.