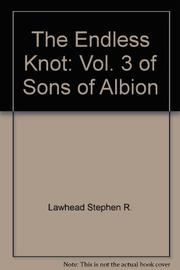 Vol. III of Sons of Albion

Wrapping up the trilogy of The Paradise War (1991) and The Silver Hand (1992), Lawhead's respectful reworking of Celtic source material. Now that Llew Silver Hand has been declared Aird Righ of Albion, professor Nettleton urges him to return to our world and settle down as Oxford graduate student Lewis. But Llew, about to marry the beautiful Goewyn, is aware that the Bardic prophecy concerning his kingship has not yet been fulfilled, and resolves to stay in Albion. A couple of hundred twiddling pages later, Goewyn is abducted and taken to the blighted, sorcerous land of Tir Aflan. So, at the head of a band of trusty Celtic warriors, Llew sails off in pursuit. Overcoming a variety of noxious and magical creatures, Llew battles his way toward a showdown with old rival Simon, the prophesied Brazen Man, and Simon's rapacious allies from our world. Finally, Llew emerges victorious—to cleanse Tir Aflan, destroy Simon, unite Albion, and return to our world as Lewis. Agreeable enough, despite that somnolent first half. Overall, a patchy but admirably restrained and above-average Celtic trilogy.