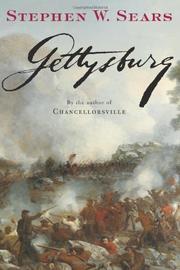 An accomplished historian of the Civil War (Controversies and Commanders, 1999, etc.) offers a blow-by-blow account of the three-day Battle of Gettysburg and its effects on the course of the conflict.

Dwight Eisenhower once recalled that at West Point he and his classmates were made to memorize the order of battle at Gettysburg hour by hour and quizzed on which unit faced which at any given moment in the combat. “If this was military history,” he wrote, “I wanted no part of it.” Had he had this as a text, Ike might have enjoyed the exercise a little more, for though Sears gives that information in lashings, he does so with a storyteller’s skill and a strategist’s appreciation for the changing tides of battle. He takes time getting to the first shot at Seminary Ridge, recapping the events that led to Robert E. Lee’s decision to bring his troops into northern territory (with the idea, Sears writes, of drawing the Union army away from Richmond) and that led Lee to disregard James Longstreet’s warning that the topography favored the Yankee enemy. Once at Gettysburg, however, Sears’s account is full of grapeshot and canister, blending a sometimes near-documentary account of minute portions of the battle with broader-ranging discussion of its conduct overall. This mix yields particularly satisfying results when it is applied to set pieces such as the Union defense of Little Round Top and George Pickett’s ill-fated Grand Charge, to which Sears brings sophisticated observations that well-versed students of warfare will appreciate but that may well be lost on less knowledgeable readers; among these is his account of Joshua Chamberlain’s famed right-wheel maneuver on Little Round Top and his analysis of Johnson Pettigrew’s arrangement of his brigades on the Confederate battle line in a compact deployment by which “colonels could keep better control of their men in the din of battle, and could reinforce the front line with their own second line rather than having to depend on some other commander for support.”

A fine study, detailed and challenging, that complements such popular accounts of the battle as Bruce Catton’s Glory Road and Shelby Foote’s The Stars in Their Courses.

FOR COUNTRY, CAUSE AND LEADER
by Stephen W. Sears
Nonfiction

TO THE GATES OF RICHMOND
by Stephen W. Sears