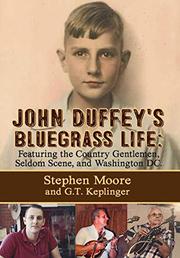 by Stephen Moore and G.T. Keplinger

An exhaustively researched profile of bluegrass legend John Duffey (1934-1996) that covers not only his life in music, but also those of his colleagues and contemporaries.

Duffey was a musician and singer who founded the important bluegrass groups The Country Gentlemen and The Seldom Scene. But even in the late 1950s, when The Country Gentlemen were forming, Duffey felt that the popular bluegrass sound was starting to get stale. When the band started recording in the early ’60s, he pushed them to incorporate more modern sounds to accommodate the folk boom. Purists scoffed, but it allowed the band to play a wider variety of clubs. That’s also when Duffey realized that entertaining a crowd took showmanship as well as musicianship, and he encouraged the band members to do things like play an agonizingly slow version of the usually fast-paced song “Cripple Creek.” Duffey also had some quirks of his own, and the authors collected extensive quotes from his friends and band mates that describe them. The Country Gentlemen were limited by Duffey’s fear of flying and his love of bowling, for example—both of which may have factored into his quitting the band in 1969. That didn’t last long, though, and Duffey pushed the boundaries of bluegrass again with The Seldom Scene in the early ’70s. Moore (co-author: Cerphe’s Up, 2016, etc.) and Keplinger (Film/Stevenson Univ.) also devote considerable time to their subject’s band mates, such as Charlie Waller, Eddie Adcock, and Tom Gray, as well as fringe figures in Duffey’s story, including musician Buzz Busby, photographer Carl Fleischhauer, and bluegrass luminary Ralph Stanley, who respected Duffey’s ability but not his off-the-cuff personal style. It’s obvious from the first chapter of this book that Moore and Keplinger aim to spare no details. They even start with a short history of Washington, D.C.’s Columbia Hospital for Women, where the musician was born, and include a photocopy of the hospital birth certificate. The book is roughly chronological from there, occasionally circling back to offer a different perspective on a particular story or some additional background. As a result, the authors leave very little untouched, right down to what Duffey preferred to eat for breakfast when he was hungry (six eggs, fatback, and buttered toast) and when he wasn’t (four eggs, fatback, and buttered toast). Despite the copious detail, however, the book offers a rich and entertaining musical history of the bluegrass scene as well as more academic materials, including an essay by Robert Kyle on Duffey’s Irish roots and a lengthy discography. Throughout, the authors’ prose is straightforward, but it can be a bit dry, as when they devote a single paragraph to breakthrough surgery that was used to restore Adcock’s playing ability but offer no quotes from the man himself about the experience. Also, when they use Duffey’s own words, they frequently and distractingly italicize them throughout the book rather than more smoothly working them into the text.

A truly definitive look at a bluegrass legend and the scene that produced him.