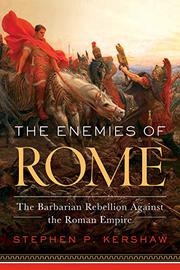 THE ENEMIES OF ROME

The Barbarian Rebellion Against the Roman Empire

A history of Rome built around the empire’s battles against internal and external enemies.

Kershaw (Classics/Oxford Univ.; The Search for Atlantis: A History of Plato’s Ideal State, 2018, etc.) begins with the “founding of the city” in 753 B.C.E. and traces his theme through the fall of Rome in 476 C.E. Each chapter covers one of Rome’s major adversaries. The list of characters includes many of the best-known names in ancient history—Hannibal, Spartacus, Cleopatra, and Attila the Hun—along with others many readers will probably encounter for the first time. The author provides solid minibiographies of most of them, sometimes making a point of debunking popular wisdom—e.g., Hannibal and Cleopatra were not black. Kershaw also gives us a good look at a number of prominent Romans (Pompey, Julius Caesar, Constantine) and at the early history of other parts of the world, notably the Middle East. A recurring theme is the question of what the ancients meant by “barbarian,” a definition that shifted as Rome absorbed Greek culture and then as the empire expanded to take in much of Western Europe, the Middle East, and parts of Africa. The Romans tended to draw highly stereotyped portraits of barbarian characters; their descriptions of the Goths and Huns make their enemies seem little better than animals. An exception was when one of them defeated a Roman general deemed to lack the proper Roman virtues; in this case, the “barbarian” is portrayed as an example of what his adversary should have been. Kershaw draws liberally on the original sources, including Plutarch, Livy, Tacitus, and other historians, with occasional references to modern research. Given the enormous swath of history the book covers, it almost inevitably lacks a certain cohesiveness as the narrative moves from one threatened frontier to another, often skipping several generations. Readers will find themselves referring frequently to the maps. Though this isn’t the first Roman history one should read, it adds a fascinating dimension for anyone with a broad knowledge of the subject.

An interesting take on Roman history focused on the peoples that resisted its growth and eventually brought about its destruction.