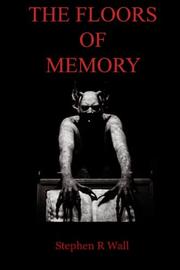 THE FLOORS OF MEMORY

Someone or something is killing the great architects of Paris. They’re dying gruesome deaths: self-combusting, melting, nearly bursting from giant kidney stones. Walter Wetwhistle (Wall has a knack for clever names: “Quentin Mollytop,” “Jean-Jean Le Jean,” etc.) is haunted by the ghost of his recently deceased partner and by a specter that coyly denies being the devil. Walter is soon caught in the web of a secret society bent on protecting its secrets. From here, Wall attempts to tell a grand, multicharacter, mystical adventure story in the tradition of Umberto Eco and Thomas Pynchon. Unfortunately, the author’s devotion to tortuously complex sentences, dense verbiage and overwrought, melodramatic dialogue causes this novel to collapse under the weight of its own ambition. The novel has plenty of potential, but with a plot lifted from familiar—and, at this point, overdone—tales of secret sects trying to protect the truth about Jesus Christ’s living descendants, the self-satisfied story confuses more than it thrills. The problem isn’t Wall’s ability to wrangle words into stimulating, descriptive sentences, which are, on occasion, beautiful and insightful: “In sharp relief, he saw the city laid out before him like a cemetery, a fossil garden, a conscious considered work, like an arcane interstellar map.” Rather, the problem is that Wall doesn’t always know when to stop writing. Exquisite moments are often overrun by neighboring sentences that are so complex as to be nearly indecipherable on first read: “Loping clouds skulked guiltily across a cerulean void like nascent treacheries.” This intense, overburdened writing style makes the novel a difficult slog, and muddled imagery doesn’t help. One character smiles “revoltingly like a gorgonzola cat.”

Full of potential but undone because of a lack of control.