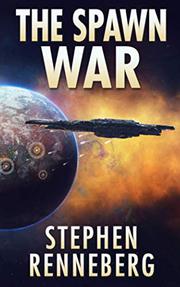 Masquerading as a merchant, an Earth spy takes refugees and a small crew into the midst of a gigantic interstellar war that could engulf the human race.

In this fourth installment, Renneberg (The Riven Stars, 2018, etc.) continues his rousing series of SF space operas and star wars. The setting is the year 4607. The human race, spacefaring but long quarantined by the regulating “Galactic Forum” of aliens, is barely a force in the pantheon of ancient, competing species. And humankind has problems of its own with an “Earth Separatist” revolutionary movement, heavy with malcontents and self-serving warlords. Humanity thus seems merely a bit player in a galaxy-spanning war between ancient civilizations. The formidable antagonists are the One Spawn—amphibian types with a hive structure of cruel matriarchs—using sinister robot weaponry and fearless troops in an all-out blitzkrieg against the dominant, more or less benevolent Tau Cetins. Recurring hero/first-person narrator Sirius Kade is an undercover Earth Intelligence Service agent, impersonating a merchant/adventurer of the Han Solo sort but secretly endowed with the cybernetic databases and nanotech reflexes of a supersoldier (though he also has a moral and ethics code all his own). Kade’s controller orders him on a mission to a besieged world—with the excuse of uniting a love-struck crew member with a girlfriend imprisoned on a bleak planet—that seems more key to the Separatist war than the One Spawn’s rampage. But in truth, it’s all to gain control of a much-sought item that could make a difference in the Spawn War. Soon, a veritable assortment of aliens and augmented Earth soldiers is on Kade’s ship, the Silver Lining. The ride is somewhat episodic (reminiscent of a vintage cliffhanger serial) but still an enjoyable roller coaster of battles, chases, “novarium” grenades, and narrow escapes, constantly reminding readers that plucky humans are just the small fry in this cosmic ocean of apex predators. But Renneberg clings to the genre trope that Homo sapiens’ fighting spirit, given a fair chance, would impress and intimidate even far older and more advanced ETs who discount the Earth interlopers. With action blasts right out of the gate, fun faux physics, stellar dreadnaughts bristling with guns, and fearsome, theoretical mega-weapons, this story is space opera as fans like it, sometimes feeling camera-ready for Lucasfilm but not at all Skywalker-derivative.

Be prepared to dodge lethal energy beams on every page of this rip-roaring tale.