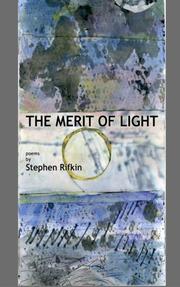 The Merit of Light

A debut collection of poetry inspired by the author’s relationship with his wife and their time living on an island in Maine.

Rifkin’s poems are heavily influenced by nature. In the preface, the author notes that he and his wife lived on an island when he was writing, and he meditates on everything from the changing seasons to the tempestuous tides. His often melancholic musings communicate both the beauty and isolation of island life, and his wife’s simple but lovely sketches enhance the poems, making them even more evocative. The illustration of birds flying over a moonlit ocean, which accompanies “Tides For the Moon,” is especially pretty. Although the collection contains some love poems, including the very romantic “In Love,” many are more impressionistic than overtly emotional. In the beautiful “Of Irises,” the author displays his playful, creative skills with language: “in a garden / at dusk / blades stem and bud or now stars / bluish and blush.” His attempts at more colloquial expression are less successful. In “Arabic Calligraphy,” he writes, “There is much that is silly about Arabic / calligraphy / And a lot that isn’t.” Such lines sound a bit clumsy, as if the same thoughts could be conveyed more artfully and economically. The collection’s closing series of three poems, together titled “Views of Italy,” strikes a more satisfying balance between a narrative style of verse and rich, thoughtful word choice. In “A Fury in the Trees of Tuscany,” Rifkin writes, “Yet there was beauty, too, to be fair, / the fat-cheeked children, and the young mothers, / fair-skinned and dark, and not just blood on / the walls, / the tatter of a flag stuck to a dying horse.”

A promising, if uneven, debut from a poet whose work will continue to mature and evolve.