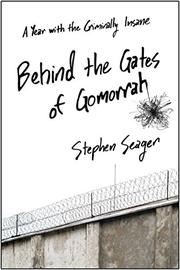 BEHIND THE GATES OF GOMORRAH

A Year with the Criminally Insane

As a newcomer to the psychiatric facility, the author was immediately immersed in the drastic severity of the psychotic patients housed in “Unit C,” a compound with security rivaling that of San Quentin prison. After being assaulted within minutes, Seager began reconsidering his job decision, especially after learning that the unit’s previous psychiatrist was put in a coma after being attacked. Dubbed “Gomorrah,” the hospital ward soon lived up to its moniker as a house of violence not readily obvious from its manicured grounds. The author chronicles months of daily, terrifying patient interactions, which tested not only his personal fortitude, but his professionalism as a mental health caregiver. Though all had murder on their rap sheets, the scariest of Unit C’s 40 residents was hulking, unpredictable Bill McCoy, whom everyone feared most yet wouldn’t be policed for his in-house extortion due to the circuitous nature of the prison system (he’d only end up back at Napa State). Some patients wore paper Zorro masks and smeared feces on themselves, while others hid makeshift distillery contraptions in their closets or sold fermented fruit cocktail as prison alcohol; the remainder were a manageably maniacal lot with short tempers. Special events like Halloween proved bizarre; Thanksgiving dinners were somber, with minimal visitors (many residents had killed their own families). Though relentlessly unsettling and grim, there are spots of levity. Seager’s descriptions can be darkly humorous: On a particularly bad day, the author became “engulfed in a wave of hungry psychopaths eagerly churning their way to the cafeteria.” In the final chapter, the author urges citizens to become proactive in enacting legislation to change how state hospitals are run, thus increasing their safety quotients and those of the communities they serve.

A chilling account of a livelihood spent curating the criminally psychotic.