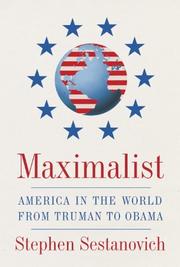 America in the World from Truman to Obama

An informed analysis of American foreign policy that reveals a cyclical pattern.

Sestanovich (International Diplomacy/Columbia Univ.) served in high posts under Bill Clinton and Ronald Reagan and is currently a senior fellow for Russian and Eurasian Studies at the Council on Foreign Relations. In this overview of the last 12 presidential administrations, he identifies two contrasting stances: maximalism, characterized by aggressive, expensive responses to international challenges; and retrenchment, efforts “to unwind a disaster and to put American policy on a more sustainable foundation.” Truman, Kennedy, Reagan and George W. Bush were maximalists, the author writes. Eisenhower, Ford, Johnson, Nixon and Carter undertook retrenchment, providing “a corrective to the other’s mistakes.” Clinton and George H.W. Bush were hybrids. In each case, “when retrenchment fails to rebuild American power, meet new challenges, or compete effectively, the maximalist reappears, ready with ambitious formulas for doing so.” No matter who was president, Sestanovich found vehement discord among advisers, in Congress, and in public discourse, as maximalists vied with retrenchers or, midstream, changed their positions. In 1948, for example, Truman’s advisers Dean Acheson and George Kennan were at odds, with Kennan believing the Cold War was “a temporary spike of tension” that could be resolved through compromise, and Acheson refusing to yield to Soviet demands. The author analyzes Kennedy’s decision-making about Russia’s presence in Cuba and Johnson’s about Vietnam, which resulted in the administration’s conclusion “that the United States would succeed only if it could run the show.” The Obama administration began with retrenchment, Sestanovich writes, but while Obama favors “innovative, low-cost, and small-footprint approaches,” among those innovations are forceful measures such as drones, surveillance and Special Forces strikes.

As his title implies, Sestanovich believes in “productive maximalism” that acknowledges America’s imperative to “call the shots” to achieve “a satisfactory global order—secure, prosperous, and democratic.” This book gives ample evidence of the rocky road toward that goal.