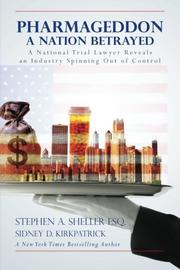 by Stephen A. ShellerSidney D. Kirkpatrick

A book offers a critique of the pharmaceutical industry from a lawyer who battled it.

The currently contentious debate over health care has drawn the public’s attention to the pharmaceutical industry, a multibillion-dollar market that wields considerable influence over the political and medical communities. Sheller (Lawyering in Times of Saints and Evil Doers, 2015), an attorney with nearly a half-century of professional experience, spent a good deal of his career exposing big pharma’s more nefarious practices in court. For example, Eli Lilly marketed its “Prozac Weekly” pill by sending samples directly to candidate consumers, many of whom did not have a prescription for the drug, by accessing confidential medical information. Johnson & Johnson marketed Risperdal, a dangerous antipsychotic drug, to children with attention deficit disorder, some of whom were physically disfigured as a result. AstraZeneca illegally compensated physicians for prescribing Seroquel, another antipsychotic drug, which the company considered marketing with cartoon characters inspired by Winnie the Pooh. Time and again, Sheller uncovered a pattern of behavior that prioritized profit over consumer safety, facilitated by a collusion among politicians, regulatory agencies, medical professionals, and pharmaceutical companies, leaving the public woefully vulnerable. Sheller and Kirkpatrick’s (True Tales from the Edgar Cayce Archives, 2015, etc.) book does double duty: it’s a research study of the pharmaceutical industry’s misdeeds and a memoir recounting Sheller’s legal combat with the biggest offenders. His cases relied heavily on the testimony of whistleblowers, who are often too intimidated by the fear of reprisal to come forward. The work ends with a catalog of sensible policy fixes, which include the Food and Drug Administration’s dramatic overhaul and the establishment of independent clinical trials for experimental drugs. Despite Sheller’s many courtroom triumphs, he concludes on a less than sanguine note: “However much I would like to celebrate, I can’t claim victory. Newer and potentially more lethal pharmaceuticals enter the market each month, and the corporate titans with whom I do battle become ever more powerful and cunning.” The first chapter, which ultimately connects the voter fraud in the 2000 presidential election to a slackening of restrictions on big pharma, is far too digressive and lingers too long on the minutiae of that particular legal contest. But the remainder of the book furnishes relentlessly meticulous analysis, producing an impressive marriage of investigative journalism, legal scholarship, and public policy.