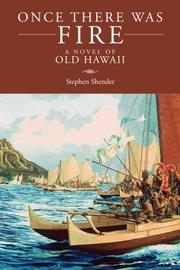 ONCE THERE WAS FIRE

A Novel of Old Hawaii

In Shender’s debut historical novel, an 18th- and 19th-century Hawaiian ruler unites the island’s people through war, diplomacy, and intrigue in the years before, during, and after the arrival of European explorers.

Benjamin Namakeha, a contemporary of Kamehameha I (circa 1736-1819), tells of the events of the story after the fact, with the perspective of age and in the very different culture of mid-19th-century Hawaii. When Kamehameha was a youth, Namakeha says, he exceled at training in the arts of war; he gained strength and sharpened his wits, which served him well when navigating court intrigue, including multiple attempts to poison him. As Shender traces the Hawaiian hero’s life, he seamlessly integrates Hawaiian words, making the language easy for readers to pick up while also adding realism and flavor: “The older boy hurled the insult at Kamehameha like a short ihe spear.” In 1778, British captain James Cook lands in Hawaii; his arrival coincides with the foretold return of the god Lono. This coincidence, and the new arrivals’ advanced technology, convinces many Hawaiians that the foreigners (or “haoles”) are divine. Kamehameha is skeptical, however, and learns as much as he can about their weaponry, and he uses this knowledge in future battles. Shender’s delightful depictions of the first exchanges between strange cultures are spot-on, as when an interpreter for the British says, “he will pay generously in cloth and iron,” and a Hawaiian asks what iron is: “Ailon’e? What is ailon’e?” Although Cook is killed in a confrontation with islanders, Kamehameha and his people continue their trade with Europeans. In time, Kamehameha consolidates his power, dealing not only with military enemies, but also family problems. The story shows the engaging parallels between Kamehameha’s story and European mythology as well as religious tales. For example, when Kamehameha is born, his mother has a dream that frightens the island’s rulers, who then try to have him killed. Later, in a story that mirrors King Arthur’s, Kamehameha moves the Naha Stone—a deed that prophesies his destiny as ruler. Overall, this novel should gratify historians and general readers alike

A thoughtful, well-written work that breathes new life into past personalities and events.