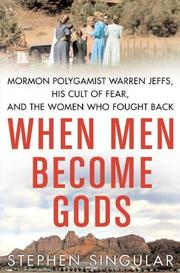 Mormon Polygamist Warren Jeffs, His Cult of Fear, and the Women Who Fought Back

The charismatic head of the Fundamentalist Latter Day Saints, Jeffs was a polygamist of the highest order, taking countless wives and all but ordering his flock to do the same. For nearly a decade, he ruled over thousands of followers, coercing countless young girls into forced marriages with older men. Convicted of rape as an accomplice in 2007, he went on the lam soon thereafter. Here the book evolves from a behind-the-scenes exposé of an influential cult into a gripping true-crime thriller, loaded with federal agents, car chases and courtroom dramas. Singular is a canny writer, and his prose is muscular and straightforward, never detracting from the power of the story. He also demonstrates an impressive ability to get inside his subjects’ heads—dialogues or inner monologues never seem forced or false. Readers interested in learning how one man can bastardize spiritual doctrines for his personal gain—or those intrigued by the rise and fall of a patently evil person—will be fascinated by Singular’s examination of religious corruption. But be prepared to take a shower after finishing the book, because Jeffs will make anybody with a semblance of morality feel dirty.