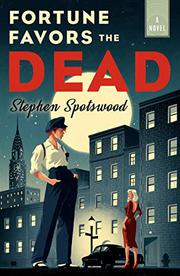 A sprightly period debut that shows New York’s preeminent female detective and her assistant plying their trade in 1945.

When the matriarch of the well-to-do Collins family is bashed to death by a crystal ball in a locked room, her relatives ask Lillian Pentecost to look into the case. Despite its wealth, the family has already seen its share of troubles. Abigail Collins’ husband, steel magnate Alistair Collins, shot himself a year ago. Before her own death, Abigail was consulting psychic Ariel Belestrade, whose practices are so questionable that she’s being investigated by skeptical anthropology professor Olivia Waterhouse. And problems continue without missing a beat. Shortly after Harrison Wallace, the acting CEO of Collins Steelworks and Manufacturing, hires Lillian, Rebecca Collins, Abigail’s saucy daughter and Wallace’s goddaughter, starts hitting on Willowjean Parker, the assistant Lillian hired away from a circus and trained as her assistant and successor. Will is both responsive to and disconcerted by Becca’s overtures; certainly she’d rather get kissed by Becca than beaten by the unseen enemy who attacks her moments after their most recent tête-à-tête. Spotswood supplies scattershot period detail (Will presciently calls Lillian “Ms. Pentecost” in 1945), mild wisecracks, an anticlimactic solution to that locked-room puzzle, and a Chinese box of denouements: If your chosen suspect isn’t pronounced guilty, just wait a few pages.

The most striking feature is the provocative gender-flipping of Nero Wolfe and Archie Goodwin.