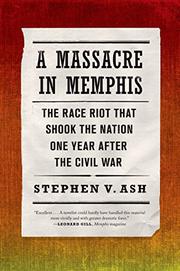 A MASSACRE IN MEMPHIS

The Race Riot that Shook the Nation One Year After the Civil War
by Stephen V. Ash
BUY NOW FROM
AMAZON
BARNES & NOBLE
LOCAL BOOKSELLER
GET WEEKLY BOOK RECOMMENDATIONS:

Meticulous account of a long-overlooked racial clash during Reconstruction.

This is the first book on events of early May 1866, in Memphis, Tenn., in which 46 blacks were murdered during three days of “barbaric” rioting by lower-class whites. Drawing on a large archive of interviews conducted during federal investigations, Ash (History/Univ. of Tennessee; The Black Experience in the Civil War South, 2010, etc.) provides a wonderful overview of life in this “dusty, crowded, deeply divided city” in the early wake of the Civil War. Captured by federal forces in 1862 (a small military force remained), Memphis on the eve of the riots brimmed with tensions. The city was awash in war memorabilia, with photos of Robert E. Lee displayed in shop windows and talk of the Emancipation Proclamation as an abomination. Many whites resented the presence of black federal troops, as well as missionaries and the Yankees of the Freedmen’s Bureau, who worked to assist former slaves. The greatest antipathy existed between recently freed blacks (half the population) and Irish-American policemen and local officials. Triggered by clashes between black men and police officers, the rioting consisted of whites rampaging through black neighborhoods, assaulting residents, breaking into homes, and setting churches and schools on fire. Congressional investigators blamed the riot on “the intense hatred of the freed people by the city’s whites, especially the Irish—a hatred stoked by the Rebel newspapers.” Widely reported nationally, the massacre was seen as an omen of what might lie ahead for the postwar South and the country. Ash offers remarkable portraits of ordinary Memphians (grocers, firemen, soldiers, etc.) caught up in the tumult of their time.

Well-written, riveting and bound to attract many readers.