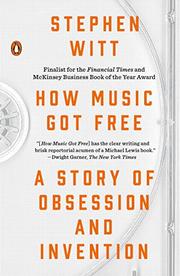 HOW MUSIC GOT FREE

The End of an Industry, the Turn of the Century, and the Patient Zero of Piracy

A history of the music industry’s reckoning with digital technology, the Internet, and the “pirate generation.”

Since file-sharing software pioneer Napster’s public meltdown, illegal downloading has grown into so widespread a practice that, as journalist Witt notes, most people think of it as a victimless crime. Others, like the author himself, began building massive archives of music for no reason other than the thrill of accumulation. It was this peculiar impulse that drove Witt to consider how digital music became the industry’s dominant format and how illegal access to it became so pervasive. His examination focuses on the German engineering team of Karlheinz Brandenburg and Bernhard Grill, who painstakingly developed and sold MP3 technology to corporate partners; former CEO of Universal Music Group Doug Morris; and the previously untold story of Dell Glover, a worker at a Polygram CD factory in the 1990s who single-handedly leaked thousands of albums through his association with the Internet’s foremost pirate group, Rabid Neurosis. Through their stories, Witt chronicles the fall of the traditional record industry and the emergence of pirate culture typified by sites like Pirate Bay and OiNK, which increasingly viewed music as a free commodity. The author also crucially points out that while pirating contributed to the industry’s decline, he counters that “the uniform blandness of the corporate sound wasn’t helping.” Witt is a sympathetic observer who captures the complexity of the pirate ethos (they made little to no money from leaks), the conundrum of developers creating technologies like BitTorrent to facilitate file sharing, and the music industry’s misguided attempts to prosecute pirates. Ultimately, the industry’s battle with file sharing is one of the first examples of how the Internet most dramatically changed business and society.

A propulsive and fascinating portrait of the people who helped upend an industry and challenge how music and media are consumed.