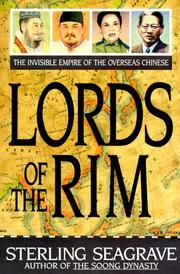 LORDS OF THE RIM

The Invisible Empire of the Overseas Chinese

An illuminating if impressionistic appreciation of the Overseas Chinese, mainland ÇmigrÇs who down through the ages have become an economic force throughout Southeast Asia and beyondnotably, on North America's West Coast. Historian Seagrave (Dragon Lady, 1992, etc.) traces the emergence of these industrious expatriates back to the 11th century b.c. when the long-lived but repressive, puritanic, and anti- business Chou dynasty first drove the country's merchant class from the capital cities of the north. Forced to resettle in the less civilized regions of the Middle Kingdom's southern coast, the internal exiles began venturing offshore. In time, they established commercial beachheads that have survived civil strife, colonialism, world wars, and xenophobia in every country of the Pacific Basin save Japan and Korea. In round numbers, the 55 million Overseas Chinese (including those in Hong Kong and Taiwan) have a GNP estimated at $450 billion per annum, and their liquid assets probably top $2 trillion. In the course of his anecdotal narrative, the author makes a number of intriguing points about the prospering, nepotistic Overseas Chinese (for whom networking is a way of life). By way of example, a significant portion of their money has been (and continues to be) earned in the drug trade and other of the world's older professions. Nor do they shy away from bribery, partnerships with public officials, or other forms of corruption long outlawed in Western marketplaces. By Seagrave's convincing account, moreover, the loyalties of these secretive and disciplined DPs are essentially parochial, i.e., to ancestral villages and dialect communities rather than to the Chinese government. In the author's informed opinion, this pragmatic lack of allegiance could keep them from returning to the mainland in any great numbers regardless of what the future holds for the Communist regime still clinging to power in Beijing. A savvy observer's episodic briefing on an ethnic group that bears watching in a world economy no longer constrained by sociopolitical frontiers.