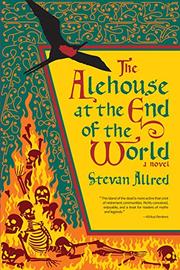 THE ALEHOUSE AT THE END OF THE WORLD

An imaginative journey into a spirit world, evoking ancient myths about death and the afterlife.

A fisherman travels from the material world to the Isle of the Dead to find his beloved. The island is populated with shape-shifting characters, many of them gods or goddesses. Countless clams hold the souls of the dead, which are “tasty little morsels” for the crow who is the undisputed King of the Dead. The fisherman strikes a deal with the crow to find the clam containing his beloved and not eat it, but the crow thinks of him as that “flaming dingleberry,” and the fisherman soon wants to kill the “foul tyrant” crow. The characters are marvelously entertaining—a frigatebird, a pelican, and a cormorant are low-level gods with distinct personalities. They befriend the fisherman and fear the crow, who refers to himself with the royal “We.” (He can take the form of a man, a mole, a dragonfly, or any other shape he wants.) And there is Dewi Sri, the goddess of rice and fertility, who cannot do harm and finds the crow pretty sexy in his human form. For the crow’s part, she makes his “zibik” hard enough to carve an “entire forest into toothpicks.” A couple of sex scenes are explicit despite metaphors of arrows and quivers and touching that brings “earth and heaven together.” But both know that lust doesn’t equate with love, and soon he wants her dead. Incidentally, the entire spirit world lies inside the belly of the giant beast Kiamah, “the devourer of all things.” Yet island residents still enjoy their ale, and at one point the fisherman declares “It’s good to be alive!” This island of the dead is more active than a lot of retirement communities.

Richly conceived, enjoyable, and a treat for readers of myths and legends.