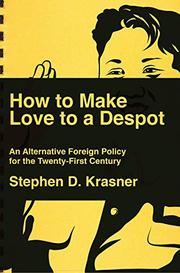 HOW TO MAKE LOVE TO A DESPOT

An Alternative Foreign Policy for the Twenty-First Century
by Steve D. Krasner
BUY NOW FROM
AMAZON
GET WEEKLY BOOK RECOMMENDATIONS:

The American project to spread democracy is a failure—and so it’s time for some realpolitik instead.

Krasner (International Relations/Stanford Univ.; Power, the State, and Sovereignty: Essays on International Relations, 2009, etc.) offers the rather dispiriting observation that popular self-governance is not part of the natural order and that because “despotism is much more likely than consolidated democracy,” it makes good sense to adjust foreign policy goals to recognize that we’re likely to be dealing with tyrants wherever we turn. Certainly, this has been the case with the current presidential administration, which would seem to have despotic tendencies itself. Elites hold power, and they will do what they can to maintain it, which means that injecting power-sharing values into any discussion of political reforms in exchange for foreign aid is likely to be a nonstarter. Krasner serves up numerous examples from Afghanistan, a failed state into which America has poured buckets of blood and dollars. Attempted institutional reforms, such as tying aid to educating women to become voting, equal citizens, have largely been rejected. Just so, Krasner notes, civil rights standards that give equality to LGBTQ citizens are also likely to be rejected by many societies around the world. Our demand for “good governance,” which would establish such things as inalienable rights, is too often overlooked or subverted, which means that we need to lower our expectations to what the author calls “good enough governance.” This is better than poor governance, he argues, which is responsible for numerous ills that affect the developed world—e.g., setting in motion armies of refugees and migrants and increasing the chances that “some new communicable disease will not be detected at an early stage.” Krasner often resorts to professional jargon (“path-dependent,” “open access order,” “clientelism,” “prebendalism,” and the like), and his argument is both accessible and open to criticism since it goes against—or used to, anyway—the American grain to cozy up to monsters.

Much food for thought for policymakers, if with a disagreeably Machiavellian tang.