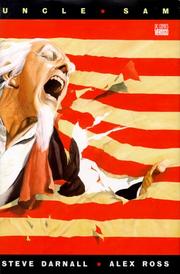 This truly subversive graphic novel—more explicitly radical than anything else from DC Comics in recent memory—almost makes up for the years of muscular patriotism and jingoistic violence that have long defined most of the company’s product. Alex Ross, who recently provided the lush paintings for Superman: Peace on Earth, here flexes his illustrative skills in the service of Darnall’s stunning text, a damning account of American political history that also affirms basic democratic ideals. From the first full-page illustration of Uncle Sam as a derelict reaching out to the reader, the visually rich narrative makes its overarching point: the spirit of everything great in American history is down on its luck. Uncle Sam, whose image here derives largely from James Montgomery Flagg’s famous “I Want You” poster, stumbles through a dreamy landscape. In the foreground, he’s an “old nut,” a psycho in the ER who spouts sound bites from presidential history and pop culture. Periodically, he finds himself elsewhere in time: preparing to fight the Revolutionary War; in Kennedy’s Dallas limo; at the Blackhawk Massacre of 1832; at Andersonville Prison; and at a labor protest in 1932; at a Louisiana lynching. Scenes blend into one another, demonstrating the continuity of American history; bedraggled present-day Sam interrupts a political rally exploiting his alter ego. The pictorial narrative here is so smart that political speeches are illustrated with voice-over balloons explicating the truth behind the double-talk. Supplemented with a fine essay on the iconography and legend of Uncle Sam, this portrait of a down-and-out American hero quotes visually from both fine art (e.g., Vermeer) and classic illustration—the spirit of N.C.Wyeth is very much alive here. Among the most captivating examples of left-wing agitprop since the days of the Popular Front: Darnall and Ross’s populist message comes draped in red, white, and true-blue.