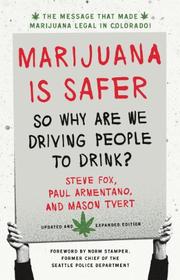 So Why Are We Driving People to Drink?: Updated and Expanded Edition

A sensible approach to the legalization of marijuana that pits the plant against alcohol, from Fox and Tvert (Marijuana Policy Project) and Armentano (National Organization for the Reform of Marijuana Laws).

It’s not rocket science: Alcohol puts more people in the hospital or graveyard than marijuana. If our laws are meant to prevent harm to others, then what harm are we trying to prevent by the illegalization of marijuana? In fact, making marijuana illegal absurdly inflates its value and encourages violent crime to command its distribution. The sources of marijuana’s illegalization are vile, rather easily traceable to bigoted attitudes toward Mexicans and African-Americans. Certainly, there are moments in this otherwise thoughtful and policy-driven initiative that veer perilously close to demonizing alcohol in the same manner that marijuana has been demonized. Is it really universal that “[w]hen low to moderate levels of alcohol are consumed, complex mental faculties such as memory, concentration, and judgment are affected, as well as one’s mood and motor coordination”? To what degree? Doesn’t a toke or two get you fried? Occasionally, the authors address any study calling marijuana to the table with, “though this finding remains controversial and inconclusive,” while accepting as gospel studies that, for instance, report any alcohol consumption by women increases cancer, which should require a caveat. Thinking people—the book’s target audience—will feel this condescension. Regardless, the authors’ argument that marijuana is the safer of the two recreational intoxicants is rock solid, and one can see that this everyday, common-sense comparison would be an effective tool in changing public perception, manipulated as it has been by everyone from Nancy Reagan to the great brewing concerns. The authors end with a workable proposal for a grass-roots response, complete with talking points and ready answers to FAQs, to bring the issue to the ballot.

A well-designed initiative to redress the villainization of marijuana.