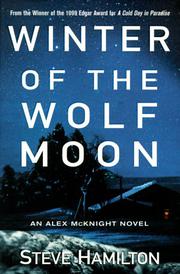 WINTER OF THE WOLF MOON

The lady in distress is a lovely Ojibwa woman whom Alex McKnight finds difficult to resist. Never mind that the ex-Detroit cop has promised himself to stay out of the “distress” business in the wake of an earlier adventure (A Cold Day in Paradise, 1998) that ended dismally. Dorothy Parrish clearly needs protection. Moreover, Lonnie Bruckman, the predator in question, is an arrogant, merciless specimen Alex wouldn’t mind crossing. And then, of course, there’s the winter cold in Michigan’s Upper Peninsula’so bitter and punishing that it would take a flintier heart than Alex’s to leave anyone out in it. So he puts Dorothy in one of the empty cabins he usually rents out to snowmobilers, tabling long-range plans until the morning. But by then Dorothy’s gone, abducted, Alex is sure, by the detestable Bruckman. Thus, the game’s afoot'Alex tracking Dorothy, which means Bruckman, which, suddenly, means mysterious strangers tracking Alex. Turns out that Dorothy has a mysterious white canvas bag that powerful people have lost and will kill to retrieve. Alex doesn’t know what’s in it, and doesn’t really care. All he wants is Dorothy safe. Eventually, he gets what he wants'and a lot of what he doesn’t: several of the most notable beatings since early Dick Francis. In his second outing, Hamilton continues to show promise. His protagonist is likable as well as durable, his raffish cast sharply observed and entertaining. Moreover, he knows how to pace a story, something of a lost art in recent crime fiction. (Author tour)