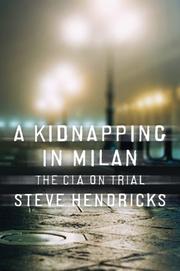 A KIDNAPPING IN MILAN

The CIA on Trial

The vivid true story behind the kidnapping of Islamist troublemaker Abu Omar in Milan in 2003.

Tipped off by an American CIA chief to a terrorist plot led by an Egyptian exile who lived in the relatively liberal Milan and worshipped at an activist mosque, the Italian detectives helped put in motion a “rendition” in February 2003 that would have troubling repercussions. After 9/11, as journalist Hendricks (The Unquiet Grave: The FBI and the Struggle for the Soul of Indian Country, 2006) writes, the CIA frequently outsourced its covert operations, and Abu Omar was presumed to be a militant leader recruiting for a terrorist group in Iraq, on the eve of the U.S. invasion of that country. Abu Omar was seized from the streets of Milan, stuffed in a van, driven to the international air base, loaded on a plane and imprisoned somewhere in Egypt. He was also badly tortured in prison, and the author provides a horrific examination of the current torture practices. After some months he was inexplicably released. Subsequently, the Italian court decided to take up Abu Omar’s case, even though a search of his apartment found incriminating evidence of his Islamic fanaticism. Magistrate Armando Spataro suspected that the Americans were involved. With a little research—and thanks to the spies’ sloppy tactics—the Italians discovered that at least 26 American amateurs had their hands in this case. However, in this new war on terror, “few governments had challenged the American warriors,” and both Silvio Berlusconi and Barack Obama defied the Italian court, which nonetheless tried the informant and the others involved in absentia. The author’s attempts to interview the depleted, money-grasping Abu Omar are largely unsuccessful, and the whole affair remains sordid and sticky—and still unresolved.

Despite an unsatisfying conclusion, Hendricks does a nice job sustaining interest in this convoluted spy case.