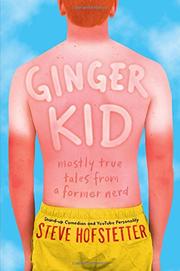 Comedian and YouTube personality Hofstetter pens a memoir about attending a prominent Manhattan high school, where he faces bullying, overcomes shyness, finds his true friends, learns about relationships and his naiveté, and discovers passions for writing and comedy.

The narrative is told in first-person and in three parts: opener, feature, and headliner—the same outlined acts that make up a typical American comedy show. Hofstetter begins by depicting an easy, relaxed elementary and middle school experience in Queens, New York. As the youngest of four siblings, he tells readers, “I never realized my family didn’t have money”—a detail that is contingent on where an individual lives, as Hofstetter’s family of six in a three-bedroom house might seem quite luxurious to some. Dated references will be lost on young readers, but what won’t be lost are the references to an often stoned teacher, minimal mentions of sex (both on the phone and in the flesh) between inexperienced teens, and weapons at school—a kid pulls out a knife on young Hofstetter twice. The redheaded, white Jewish teen begins high school attempting to keep a low profile and remain an outcast; his journey includes much work with the United Synagogue Youth and navigation of sexual politics, and by the end, readers will recognize character growth.

Despite the book’s occasional long-windedness and repetitiveness, some teen readers may still find themselves rooting for young Steve. (Memoir. 13-17)

THE AMAZING BOOK IS NOT ON FIRE
by Dan Howell
Children