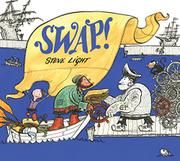 A broken-down captain and his young, peg-legged mate rediscover an ages-old system to rebuild their battered ship without spending a penny.

It’s called barter or swap, that mode of trade that requires not coinage but need. Light starts at the very beginning: the poor captain has a button, which doesn’t look very promising until a lady agrees to swap two teacups for the button, which the boy then turns around and swaps for three coils of rope. For two of the coils he gets six oars, and for two of the oars he gets six flags. Flags? Well, you never know where things may lead. Flags beget anchors that beget sails that beget ships’ wheels and birds and jaunty hats and a hand-carved figurehead. Next thing you know, the old wreck is not only seaworthy, but has a bit of dash. Light’s artwork is lightly amusing throughout, with a throng of crabbed ink lines busily filling the mostly white backgrounds, making the incidents of color—blue here, purple and orange there—the more sparkling. Complementing the smart artwork is a smart story: you don’t have to have a pocket full of gold to get by; wits often work just as well. Though the boy’s peg leg immediately conjures hoary old pirate tropes, these are honest, hard-working tars, and it’s a positive delight to see a disabled boy depicted as an equal participant in the economy.

Keep your bitcoins—you never know when somebody might need a button.