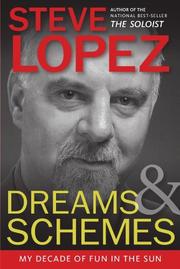 My Decade of Fun in the Sun

A novelist and newspaper writer shares a bounty of true stories and observations on life in Southern California.

Nearly a decade ago, Lopez (The Soloist, 2008, etc.) began writing a human-interest column for the Los Angeles Times, and his impressive awareness on a variety of subject matters is on fine display in this collection of his best work. The author describes an informative lunch date with retired billionaire philanthropist Eli Broad, a $400 haircut at the same Beverly Hills salon Arnold Schwarzenegger frequents and the monetary glut of political officials. The range of his subject matter is pleasingly vast. Dismissing the “hogwash” of parking tickets, traffic, marauding raccoons and coyotes and needless teacher layoffs, Lopez then directs his attention to issues of gay marriage, Iraq, the “skid row” of downtown Los Angeles and the immense hypocrisy of L.A. Cardinal Roger Mahony. With the zeal of an investigative reporter, Lopez devotes plenty of space to the political bureaucracies of Mayor Antonio Villaraigosa and former California governor Schwarzenegger. He also provides many only-in-L.A. pieces like his chronicle of 97-year-old struggling actress Mae Laborde (who’s now 101 and still working), Lopez’s caretaking of a homeless, classically trained musician (a story that became his book The Soloist, and the film starring Jamie Foxx) and Malibu, the overpriced celebrity-populated enclave where music-industry mogul David Geffen exercised his mistaken “ownership” of the public beach fronting his property. Lopez proves that “crime doesn’t sleep in the naked city,” as he field-tested legal alcohol limits (at a police station), visited prostitutes, and purchased drugs and a fake driver’s license. The sheer variety and accessibility of the columnist’s subject matter is a draw, while the author’s engaging prose speaks for itself.

There’s something for everyone in this smart, comprehensive anthology of West Coast city living.