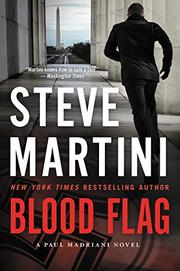 After World War II veteran Robert Brauer dies under mysterious circumstances, San Diego attorney Paul Madriani—hired to defend Brauer's daughter on charges of assisting a suicide—discovers the old man was not the only member of his former Army unit to meet with a suspicious end.

Shortly before his death, Brauer received a package from an Army buddy containing a key to a safe-deposit box. No sooner has Madriani signed on to the case than his plucky young assistant, Sofia, is murdered, and Madriani and his legal partner, Harry Hinds, find themselves in the middle of a strange plot involving a Nazi relic known as the Blood Flag. Unbeknownst to the lawyers—or the U.S. government—the Israeli intelligence agency Mossad also is in hot pursuit of the flag, which reputedly was bloodied by an accomplice of Hitler's during the future Führer's attempted takeover of Munich's city hall in 1923. Working from inside the California Department of Justice, Mossad will take extreme measures to get their hands on the flag—and they're not the only ones. The trail leads Madriani to the rich and powerful married man with whom Sofia, who was pregnant when she died, was having an affair. Madriani's sensitive wife, Joselyn, who was protective of Sofia, proves her husband's ace in the hole in the investigation. The foreign operatives aren't very interesting, and the international intrigue seems like an add-on to the plot. But otherwise, the novel boasts the sure-handed, suspenseful storytelling that Martini's fans have come to expect.