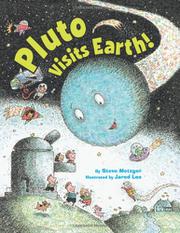 Angry at learning he’s been demoted to a dwarf planet, Pluto pays a visit to Earth, where a boy’s reassurance satisfies his need to be special.

After Speedy the space rock tells him about his new status, Pluto seeks help from other planets on his journey to demand reclassification. Unfortunately, they’re too busy, too scared, too vain, too bossy and too distracted. Metzger’s personified planets appear as large, round, expressive faces in Lee’s whimsical pen-and-ink illustrations. Some speak in speech bubbles. Varying in size and spread, these images also show a variety of surprising travelers whizzing about. (Don’t miss the snowman astronaut.) The near-black of space is effectively rendered with hundreds of scribbled lines; pastel daubs show the blue of Earth and Pluto's purple rage. The author includes some actual facts, supplemented by an afterword describing Pluto’s discovery, composition and moons, as well as the International Astronomical Union’s current definition of a planet, which the one-time ninth planet doesn’t meet. This laudable attempt to present the most recent understanding of the solar system to very young readers and listeners also demonstrates science’s rapidly changing state: Pluto’s most recently discovered fourth moon, still unnamed, is not included.

Playful science for preschool and the early elementary years.