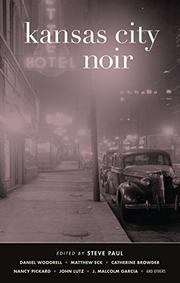 What about Kansas City says noir? Half of these 14 new stories leave this question a mystery because they reveal so little about the city. Oddly, it’s the shorter stories that are more steeped in local atmosphere. Linda Rodriguez’s retired hero crosses a line to protect his South Troost neighborhood from gangs and lives to regret it. Nancy Pickard shows traumatic childhood memories of the Paseo casting a long shadow over a woman in faraway Detroit. Mitch Brian provides a slight but evocative account of the last night before a movie theater goes dark. Daniel Woodrell traces the murderous arc of a female who tears up the city and feasts on the resulting headlines. Phong Nguyen imagines an episode built around a real-life 19th-century political fixer, and Andrés Rodríguez devises a more mysterious end for the famous owner of Milton’s Tap Room. In the most routine of the stories, Nadia Pflaum explains why you can’t get good Kansas City barbecue anymore. The other entries aren’t any less successful, just more indeterminate in their time and place. Matthew Eck’s hero and heroine, children of serial killers, meet at a convention in a town that just happens to be Kansas City. John Lutz spins a tart variation on Thelma and Louise that could have followed any mean streets. Same thing with Kevin Prufer’s tale of a sick cop on the trail of an even sicker killer, or Catherine Browder’s cop accidentally shot during a quarrel with her lesbian live-in. Hard-used heroes and heroines seem to live a lifetime in the stories of J. Malcolm Garcia, Grace Suh and Philip Stephens. What these tales lack in geographic specificity they make up in lived experience; each one seems almost novelistic in scope. Half novels-in-waiting, half journalistic anecdotes that are equally likely to appeal to Kansas City boosters and strangers.