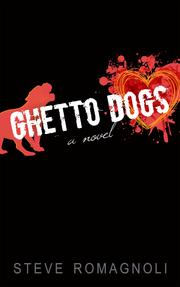 Romagnoli tells the story of an interconnected group of people in Harlem.

Set in the coarse streets of 1980s Harlem, this debut novel follows a large cast of characters navigating the world of dogfighting, public school, and basketball. There’s Rosco, a feared dogfighting ringleader and loan shark who people know is the most dangerous when he’s smiling; Desiree, the mother of Rosco’s son, who wonders why there aren’t any miracles in real life; Vincent DeRosa, a recovering drug addict–turned–public schoolteacher looking to make a difference in the world; Marisol, Desiree’s cousin, who hates Rosco and wants to protect her family from his influence; Antoine and Tyrone, teenagers who work for Rosco, tasked with taking down dead dogs from the hellish Losing Tree. Most surprisingly, there’s the ghost of Redrum, a three-legged pit bull Rosco put down, who has reappeared to bind the human characters closer together. As Tyrone explains: “Rum, he come back from the dead. Like a dog world miracle. Three days after he was hangin’ on the tree, he be seen back alive, huntin’ down a white man in Morningside.” This jolt of the supernatural is the catalyst that propels the characters toward their destinies, forcing them to consider what parts of themselves they are willing to sacrifice—and who they might be able to save—along the way. Ambitious and sprawling, this compelling book delivers critiques of American institutions, from family and education to law enforcement and criminal organizations. Romagnoli is adept at dislocating the reader within a real-but-unfamiliar world, as in the tale’s opening scene: a tree full of hanging dogs, some living and some dead. He has an ear for dialogue and a gift for establishing character with a few short clauses (one character, Ivory White, is introduced as a former “member of Rosco’s high school basketball team until he got expelled for pimp-slapping a referee”). While the basic landscapes and conclusions of the story reveal nothing new, Romagnoli achieves them in a way that feels fresh, keeping the reader with him to the final image.

An engaging and memorable social novel that involves dogfighting.