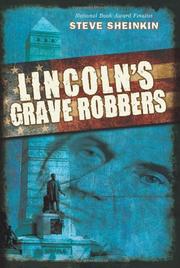 On election eve in 1876, the Chicago Tribune was dominated by election coverage, except for a curious story on page 5 about body snatchers attempting to rob the grave of Abraham Lincoln.

The headline read, “Dastardly Attempt to Despoil the Lincoln Monument: Thieves Trying to Steal the Bones of the Martyr President.” The body snatchers had narrowly escaped—without the body—but certain evidence had been found: two sets of footprints, a bull’s-eye lantern and grass pressed flat where men had been lying nearby. Sheinkin takes a little-known sidebar of American history and lures readers in with the sheer weirdness of his tale and a new lexicon of coneys, ropers, shovers, bone orchards and ghouls. The robbery was no random act, but one related to the world of 19th-century counterfeiting, so readers are introduced to the history of counterfeiting. This history and other topics provide context but slow the narrative—the grisly autopsy on the body of the fallen president, the design of the Lincoln Monument in Springfield, Ill., and the early days of the United States Secret Service. There’s even a “Body Snatcher Bonus Section.” The finished edition will include photographs, source notes and an index, not seen here. A good, ghoulish read despite slow spots. (glossary) (Nonfiction. 10-14)