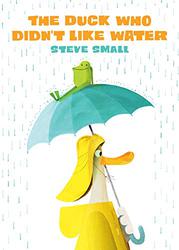 A good friend can change your life.

Duck loves settling down with a hot beverage when he reads, but that’s the only liquid for him—he doesn’t like getting wet. As a result, he dresses in a yellow rain slicker constantly and spends rainy days inside with the shutters drawn. This solitary existence continues until one night when a particularly bad storm creates a hole in Duck’s roof. When he sets out to investigate repairing it, he comes face to face with a lost frog on his doorstep. Even though Frog loves the water, the two develop a friendship through a shared love of reading. Frog eventually finds his way home, but the two have bonded, and Duck invites Frog to join him as a new roommate. Although the story’s soft cartoon illustrations are amusing—Duck peddling his bicycle in his slicker, boots, and sou’wester will elicit smiles—they can’t save the superficial message of the story. Duck’s phobia is never directly addressed, but once Frog moves in permanently, the rain slicker vanishes, so there’s a bit of a visual resolution. Books addressing new friendships are always needed, but the characters need to be developed to attract and inspire readers. This pale imitation of Oliver Jeffers’ Lost and Found (2006) doesn’t have the depth needed to carry the message. (This book was reviewed digitally with 11-by-15.8-inch double-page spreads viewed at actual size.)