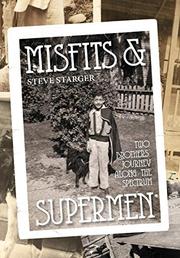 Two Brothers' Journey Along the Spectrum

The author’s older brother, Melvyn Douglas Starger, was born in 1933 in the Bronx to Jewish, Eastern European parents. Despite initially appearing to be a happy, normal child, Melvyn showed unusual behaviors as he grew, symptoms of what subsequent generations would term autism. Steve Starger, born eight years later, grew up in the shadow of his brother’s otherness and his parents’ inability to handle it, particularly once Melvyn began showing signs of other mental health issues. “Some families,” recalls Starger, “when faced with crippling mental disabilities in a family member, bond together and face their futures in some kind of harmony. Other families fall apart, unable to face the fact of a terrible intruder in their midst. My family went the latter route.” The author wasn’t without issues of his own, a perennial misfit who was similar to his brother in many ways and yet who could only sometimes connect with him in what he terms Melvyn’s “Bizarro World,” borrowing a term from Melvyn’s beloved Superman comics. With this memoir, Starger explores their relationship to each other and to their parents, both as children and young adults, including Starger’s escape from his family into the music and drugs of the 1960s and Melvyn’s eventual full-time institutionalization. Starger, an experienced journalist, vividly details the times and places he inhabited over the course of his life. His depictions of his brother are both sympathetic and cleareyed, resulting in many heartbreaking passages: “Melvyn couldn’t respond to any of it except with an occasional shy smile when someone paid attention to him in a positive, loving way. He stuttered so terribly that it seemed his jaws would crack at the effort to speak.” This peculiar combination of family dysfunction, comic books, 1960s counterculture, and mental health makes for a unique, thoroughly engaging memoir that gets at the tragedy and dignity of our collective isolation from one another.