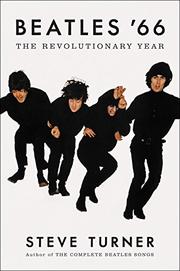 A pleasing romp through the Beatles’ annus mirabilis.

The year 1966 was the year of “Revolver,” with the band looking back into “Rubber Soul” and forward into “Sgt. Pepper.” Paul McCartney hung out with Brian Wilson, and sparks—good sparks—flew. Most of all, as London-based music journalist Turner (Popcultured: Thinking Christianly About Style, Media and Entertainment, 2013, etc.) notes in passing, it was a time when John Lennon was happy enough with his mates that he could foresee doing solo projects but keeping the Beatles going: “You need other people for ideas and we all get along fine.” December 1965, when Turner’s account begins, sees the beginning of a new phase that would find the Beatles within the studio and out of the public eye; as he reckons, the Beatles had played 188 gigs in Britain in 1962, but only 50 in 1965, in part because of the demands of worldwide touring but also because they were about to put an end to touring at all, thanks in some measure to some very unpleasant experiences in places like the Philippines. Turner provides some interesting side notes throughout, as with the Beatles’ interactions with Motown and its stars. The account closes a year later, with some interesting divergences; as Turner writes, Lennon and the lads were deep inside “Strawberry Fields Forever,” trying to find the missing element that would turn the song into magic, but broke away from it to record the very different McCartney vehicle “When I’m Sixty-Four,” a song with what Paul called a “rooty tooty” sound. Lennon’s comment about the Beatles’ popularity compared to that of a certain messiah notwithstanding, a splendid time was had by all, and Turner’s account is generally light and lighthearted, if occasionally disjointed.

Sir Paul once remarked to the author, “We were just four kids trying to earn a living.” They were much, much more, of course, and while he breaks little new ground, Turner does a nice job of capturing them at their best.