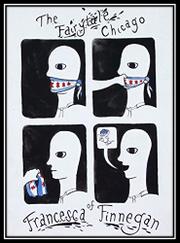 The Fairytale Chicago of Francesca Finnegan

In this fantasy debut, a wealthy but discontented businessman remembers his childhood journey through Chicago’s hidden, enchanted side with creatures and anthropomorphic animals.

Richard K. Lyons has become quite a success in the white-collar world as the “vice president of something.” But he’s far from happy, a philandering family man who dabbles too often in cocaine and alcohol and remains numbed by the stagnant workday routine. One Friday, Richard comes across a strangely familiar homeless girl, who plays him a song on the flute that apparently stirs up long-forgotten memories. As a boy, when he went by Rich, he encountered Francesca Finnegan, a girl who seemed to appear out of thin air. Francesca takes Rich on an otherworldly trek, starting with the Chicago “L” Lavender Line, a rapid-transit line Rich hasn’t heard of. The two head to the city’s largely unknown East Side, the only side not represented on Chicago’s flag. Rich’s surprised not only by the cat-headed conductor, but also the mythical beings aboard the train, from a giant Minotaur to a Cyclops. On their way to a ball at Aragon Castle, Rich and Francesca hear tales of the city’s “true history,” including slight variations on the Battle of Fort Dearborn and the Great Chicago Fire. Further adventures await, but will Richard’s recollections help him rediscover the boy he once was? Wiley renders his cheeky novel in the style of a children’s book, which he coats in satirical humor. Templeton Goodfellow, for example, is an elf decidedly uglier than elves as they’re often portrayed, with ratty hair and skin that looks its age of 10,000 years. Cihon’s illustrations follow suit: cartoonish Mr. Fox is endearing in his formal attire but clearly miserable standing in a snowstorm. Wiley, however, fills the pages with ethereal descriptions, such as alluding to Francesca’s curious “kaleidoscopic” hair and eyes, changing colors when she moves. There are just enough obscenities uttered to ensure this book is never shelved in the children’s or even YA section. The story, though, is anything but vulgar, a sweet and uplifting tale as heartwarming as the ones it’s poking fun at.