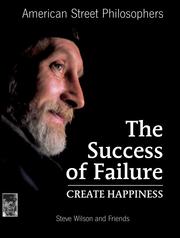 The Success of Failure

Material destitution coexists with spiritual exaltation in this poetic and photographic meditation on homelessness.

Wilson, a photographer and documentarian, shot and talked to people in homeless settlements in Oregon and Washington, sussing out the hard-won insights of these “American street philosophers.” Despite the tenuousness of their camps of cardboard boxes, sleeping bags, and the odd tent hunkered beneath bridges and overpasses that constitute their only shelter against lowering skies, their poetic musings keep returning to a crucial theme: the importance of community. “If the universe aims at richness / then the uniqueness of individuals is prime,” notes Tom, a former philosophy teacher, but he also believes that the “evolution of friendship / is greater, more important / than anything I could own or collect.” It’s a poignant reminder that the loss of connection to other people, even more than the loss of a house, is the central tragedy of homelessness. The second half of the debut book therefore explores Dignity Village, a settlement situated in a Portland parking lot where some homeless people have regained permanent shelter in the form of 42 tiny houses built from castoff and recycled building materials and supported by donations and residents’ sweat equity. It’s a slightly preachy place—“solar and wind powered,” with composting toilets and organic gardens—and its ethos is one of austere self-sufficiency. Writes resident Paul C., “Welfare begets welfare… / strips dignity, self-esteem, self-worth, self-reliance,” while Ed G. counsels an almost Buddhist renunciation of the material world as the path to freedom: “The more you have the more you want / and you stay unhappy because / there’s always more to want.” But autonomy is as much a group as an individual enterprise to judge by Wilson’s appealing photos of Dignity Villagers cooperatively building houses, staging barbecues, and painting their brightly colored sheds with cat murals to beautify the neighborhood. Even more captivating are his portraits of people—old couples, grizzled loners, toddlers, young people busking on the accordion for change—which bring to life these often invisible Americans in all their vibrant humanity.

A moving pictorial study of the meaning of home and an implicit critique of society’s conception of the good life.