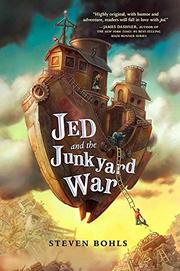 JED AND THE JUNKYARD WAR

From the Jed and the Junkyard War series, volume 1

Searching for his missing parents, a lad finds himself in a world where sky ships sail over oceans not of water, but of heaped-up appliances and other junk.

Left with an odd key and a set of even odder instructions (“push every red button you find”), 12-year-old Jed crawls through a tunnel behind the dishwasher from this world to the “junkyard”—a vast rubbish heap in which human scavengers battle swarms of quasi-mechanical “dread” assembled from random bric-a-brac for cans of food and other useful treasures. Armed only with a can opener and cooking skills, both of which are revelations to the junkyard’s residents, Jed leverages a berth aboard the flying tugboat Bessie. With his newfound allies, he sets out on a search that takes him through devastating junkstorms and other life-threatening adventures into the clutches of Lyle, the wily, golden, “meat sack”–hating dread king. As it turns out, Jed is not at all the ordinary white boy he had supposed himself but had been spirited from the junkyard as a baby and has a central role to play in Lyle’s schemes of conquest. And, in the course of a dramatic escape, Jed (literally) unlocks hidden potential of his own—the exact nature of which Bohls leaves to future episodes.

A well-wrought debut with enough of a start on both the plot and worldbuilding to leave readers impatient for the follow-up.