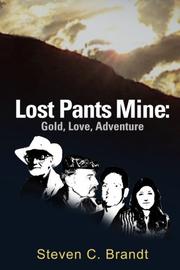 Mark Mackenzie, a rising geology professor at the University of Nevada, Reno, has a beautiful young lover named Ursula Sadler, heiress to the Sadler Corporation, long a Reno institution. Frank Adams, an old prospector with whom Mark has become friendly, thinks he can find the legendary Lost Pants gold mine, located, he thinks, near the headwaters of a river on the east side of the Sierra Nevada Mountains. “I need your help to pull it off,” Frank tells Mark. “I’m too damn old to go it alone, and I am essentially broke. The story of my life.” So he, Mark, and Mark’s flaky younger brother, Quid, traipse into the High Sierra in search of it. Mark wants to get and sell enough gold so he’s no longer intimidated by Sadler money; Frank wants to satisfy his belief that the mine actually exists; Quid just wants money, lots of it. They locate the Lost Pants—or, anyway, some abandoned mine—and find “free” (unbound) gold lying about, some old tools, and a skeleton. Then three banditos show up, though Quid gets the drop on them and sends them packing (we haven’t seen the last of them). Winter sets in, and an earthquake shakes things up. The trio goes back and forth, hoping some research will help their mission. Meanwhile, old Reinhold Sadler dies, so Ursula takes charge and has to save the shaky Sadler enterprises, at which point the narrative action swings between dangerous gold mine and tense boardroom. Details about gold mining and business maneuvering show Brandt at his best. Does it all work out in the end? Mostly, though Brandt leaves some questions unanswered: where did Quid and his latest girlfriend fetch up? Whose skeleton was that? Was the mine, in fact, the Lost Pants, and was it really salted? In the crowded plot, unnecessary details pop up—Goldman Sachs, readers are reminded, is “a multinational investment firm”—and word choice can be off target. But this is more entertainment than serious novel, and the story moves at a smart pace while delivering some solid thrills.

A promising start that could use another edit.