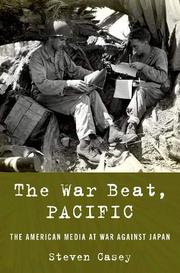 The American Media at War Against Japan

A satisfying follow-up to the author’s The War Beat, Europe (2017).

Drawing on a prodigious number of sources, including extensive media, government, and military archives; oral histories; newspapers and magazines; and published histories, memoirs, and biographies, Casey, a professor of international history at the London School of Economics, offers a cleareyed look at the experiences of war correspondents reporting on the Pacific front. Faced with tropical weather, insects, and disease, the correspondents confronted conditions very different from those in the European theater. “The jungle breaks everything down,” complained one reporter after a long stint in New Guinea, “typewriter, camera, papers. My glasses gave way this morning.” Most egregiously, reporters confronted censorship from military authorities, who insisted on vetting stories. Military regulations could be “suffocating, encompassing almost every aspect of the reporters’ daily lives, from what to wear at mealtimes to where to throw their cigarette butts.” Correspondents assigned to the Navy, whose oversight was especially strict, grew rebellious; those assigned to the Army soon realized that they would be rewarded by burnishing the reputation of the self-aggrandizing Gen. Douglas MacArthur, who believed that news of his challenges and triumphs would shift Franklin Roosevelt’s focus from Europe to the Pacific. Casey recounts in detail correspondents’ efforts to publish stories that the government wanted to suppress—of the Bataan Death March, for example, testimonies of atrocities from prisoners of war, and the destruction wrought by kamikaze raids. He creates deft portraits of a burgeoning population of correspondents as well as the editors and publishers who competed for—and helped to shaped—the news. Besides examining military engagements, he recounts reporters’ dangerous exploits as they sailed through treacherous waters, parachuted out of planes, and made their ways across forbidding terrain. Although most of these correspondents are little remembered today, Casey casts a well-deserved light on their commitment to truth and on the hardships they endured to convey the reality of war.