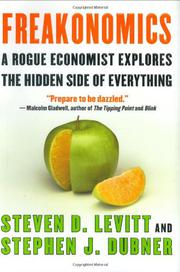 A Rogue Economist Explores the Hidden Side of Everything

Why do drug dealers live at home? Levitt (Economics/Univ. of Chicago) and Dubner (Confessions of a Hero Worshiper, 2003, etc.), who profiled Levitt for the New York Times, team up to demolish conventional wisdom.

To call Levitt a “rogue economist” may be a tad hyperbolic. Certainly this epitome of antistyle (“his appearance is High Nerd: a plaid button-down shirt, nondescript khakis and a braided belt, brown sensible shoes”) views the workaday world with different eyes; the young economist teases out meaning from juxtapositions that simply would not occur to other researchers. Consider this, for instance: in the mid-1990s, just when the Clinton administration projected it was about to skyrocket, crime in the U.S. fell markedly. And why? Because, Levitt hazarded a few years ago, of the emergent effects of the Roe v. Wade decision: legalized abortion prevented the births of millions of poor people who, beset by social adversity, were “much more likely than average to become criminals.” The suggestion, Dubner writes, “managed to offend just about everyone,” conservative and liberal alike, but it had high explanatory value. Levitt hasn’t shied away from controversy in other realms, either, preferring to let the numbers speak for themselves: a young man named Jake will earn more job interviews than one with the same credentials named DeShawn; the TV game show The Weakest Link, like society as a whole, discriminates against the elderly and Hispanics; it is human nature to cheat, and the higher up in the organization a person rises, the more likely it is that he or she will cheat. Oh, yes, and street-level drug dealers live at home with their moms because they have to; most earn well below minimum wage but accept the bad pay and dangerous conditions to get a shot at the big time, playing in what in effect is a tournament. “A crack gang works pretty much like the standard capitalist enterprise,” Levitt and Dubner write, “you have to be near the top of the pyramid to make a big wage.”

An eye-opening, and most interesting, approach to the world.