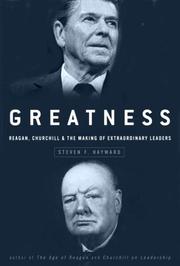 Reagan, Churchill and the Making of Extraordinary Leaders

Accept that Ronald Reagan was a genius, and the Great Communicator suddenly finds himself in august company.

In this light, American Enterprise Institute thinktanker Hayward writes, “Pondering the cases of Churchill and Reagan side by side opens a window onto critical aspects of political genius, and political greatness, at the highest level.” Conveniently, he adds, intelligence and greatness are not the same thing, which helps the argument inestimably. Now, the hardhearted may wonder at the view that Reagan won the Cold War without firing a single shot (does no one remember, say, Grenada?) or the datum that both Reagan and Churchill loved “vigorous outdoor labor,” which seems intended to plant the idea that, say, clearing brush in Texas is a sign of greatness. Other readers may wonder, too, whether the parallels Hayward draws between Churchill and Reagan could not be applied to just about any other president in recent memory. After all, Jimmy Carter liked working outdoors, had strong moral leanings, was an anticommunist and had a tough spouse. Just so, Reagan lacked Churchill’s fondness for drink, and whereas Churchill micromanaged to the tiniest detail, Reagan delegated tasks and took naps; great or no, British voters turned Churchill out of office as soon as the bombs stopped falling, while Reagan seemed bewildered at the fuss when he was caught joking before the camera that the bombs would start falling on Moscow in five minutes. But never mind: Hayward has a fluid sense of what constitutes greatness, one that includes Ronald Reagan (and perhaps the current president, who keeps a bust of Churchill in the Oval Office) but that presumably does not embrace Bill Clinton, who, after all, failed to make many rhetorical references to Churchill in his eight years in office, which fact alone sets him apart from most other presidents.

Historically minded readers will enjoy the opportunity argument. Non-Reaganites, though, will have trouble with its premises from the outset.