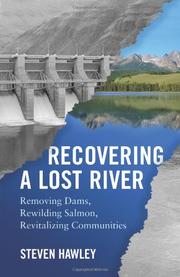 In his debut, environmental journalist Hawley describes the populist movement to remove federally funded hydroelectric dams from America’s waterways and the entrenched interests resisting this movement.

Today, writes the author, the “oceanward progress of six hundred thousand linear miles of brook, creek, stream, and river has been retarded by the construction of 75,000 dams.” Once touted as environmentally safe and economically beneficial, hydroelectric dams, particularly in the American West, have proven to be ecological disasters. Primarily focusing on efforts to remove four dams from the Snake River, a part of the Columbia River basin in the Northwest, Hawley details the damage. He begins with salmon. By the next century, they may be extinct, in large part because they cannot navigate dammed rivers like the Snake to return to their spawning grounds. In turn, fewer and fewer salmon make their way back down the Columbia to Washington’s Puget Sound to provide food for orca whales. Also endangered are the fishing industry, tourism and the traditional, salmon-centered way of life of Indian tribes such as the Nez Perce. Whole towns such as Lewiston, Idaho—situated between the Snake and Clearwater rivers—face inundation as dams lead to the buildup of silt in the rivers, raising the water level to dangerous heights. Despite arduous effort by civic and environmental groups, the dams remain. The reason for this, argues Hawley, is the power of utility companies and their allies among innumerable federal agencies who derive short-run benefit from building, maintaining and operating these dams. A fascinating though confusing section of the book follows the machinations of these agencies and their allies as they fight to save their dams. Gradually, dam removal as a social movement is growing, and the positive results of removal can be seen along the Kennebec River in southern Maine. Fish and other wildlife have returned, as have outdoors enthusiasts, and river towns have returned to economic vitality.

Both troubling and encouraging, a well-told tale of environmental activism and citizen action.