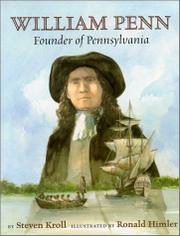 In his absorbing picture-book biography aimed at a slightly older audience, Kroll (Robert Fulton, 1999, etc.) immediately informs readers that Penn was a rebel. “Born to a life of privilege, William Penn chose dissent instead,” ignoring the status quo in favor of following his convictions, in an era of great religious and political tumult. Drawn by the belief that every individual could communicate directly with God, Penn became a Quaker; his desire for religious freedom and tolerance prompted him and his followers to travel to the land that would become Pennsylvania. Arrested over and over again for espousing his beliefs and betrayed by his business manager, Penn struggled all his life because of his convictions. The text is highly event-oriented and packed with information; the portrayal of Penn is somewhat impersonal, but readers will learn of and be impressed by his accomplishments. Himler’s watercolors accurately conjure time and place, and underscore more somber elements of the story. (chronology) (Picture book/biography. 9-12)