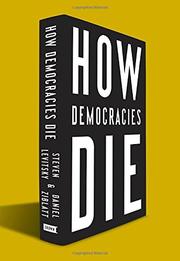 A provocative analysis of the parallels between Donald Trump’s ascent and the fall of other democracies.

Following the last presidential election, Levitsky (Transforming Labor-Based Parties in Latin America, 2003, etc.) and Ziblatt (Conservative Parties and the Birth of Democracy, 2017, etc.), both professors of government at Harvard, wrote an op-ed column titled, “Is Donald Trump a Threat to Democracy?” The answer here is a resounding yes, though, as in that column, the authors underscore their belief that the crisis extends well beyond the power won by an outsider whom they consider a demagogue and a liar. “Donald Trump may have accelerated the process, but he didn’t cause it,” they write of the politics-as-warfare mentality. “The weakening of our democratic norms is rooted in extreme partisan polarization—one that extends beyond policy differences into an existential conflict over race and culture.” The authors fault the Republican establishment for failing to stand up to Trump, even if that meant electing his opponent, and they seem almost wistfully nostalgic for the days when power brokers in smoke-filled rooms kept candidacies restricted to a club whose members knew how to play by the rules. Those supporting the candidacy of Bernie Sanders might take as much issue with their prescriptions as Trump followers will. However, the comparisons they draw to how democratic populism paved the way toward tyranny in Peru, Venezuela, Chile, and elsewhere are chilling. Among the warning signs they highlight are the Republican Senate’s refusal to consider Barack Obama’s Supreme Court nominee as well as Trump’s demonization of political opponents, minorities, and the media. As disturbing as they find the dismantling of Democratic safeguards, Levitsky and Ziblatt suggest that “a broad opposition coalition would have important benefits,” though such a coalition would strike some as a move to the center, a return to politics as usual, and even a pragmatic betrayal of principles.

The value of this book is the context it provides, in a style aimed at a concerned citizenry rather than fellow academics, rather than in the consensus it is not likely to build.