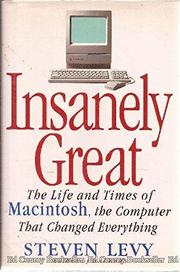 The Life and Times of Macintosh, the Computer That Changed Everything

A breezy, anecdotal, yet discerning history of the people, ideas, and technology that led to the user-friendliness of the Macintosh computer. Levy (Artificial Life, 1992, etc.) is among our best interpreters of computer technology (he speaks fluent geek). Here, however, his overbearing passion for the Macintosh keeps this from being a first-class treatment; though he recounts Apple's wrong turns and the widespread criticisms of Steve Jobs, his report lacks the rigor of Tracy Kidder's The Soul of a New Machine or even of his own Hackers (1984). Moreover, there are surprising gaps here: The early days of home-computing are limned only briefly, as are Apple's beginnings. But in tracing the evolution of how humans conceive of, and relate to, information in cyberspace, the author has done his research. From a 1945 essay by Vannevar Bush describing a ``memex''—a sort of desk/cockpit with monitors for ``piloting'' one's way through information—that inspired Douglas Engelbart to invent the desktop metaphor and the now-ubiquitous mouse, Levy takes us to the golden age of Xerox's Palo Alto Research Center (``Nerds now think of it as Camelot''). There, although Xerox overlooked the invention of the personal computer, Allan Kay wrote SmallTalk— the simple operating system that would one day be embodied in the Mac—and conceived of the ``DynaBook,'' the inspiration for Apple's PowerBook and considered ever since the Grail of computer designs. As the creation of the Mac looms, Levy focuses on the personal contributions and internal politics of those working at Apple; on software offerings like PageMaker, which revolutionized desktop publishing; and the last step in evolving the Mac as we know it: Bill Atkinson's HyperCard, the program that changed the way computer-users think about information. Everything you never realized you wanted to know about the Mac, by a very smart, infectiously enthusiastic partisan.