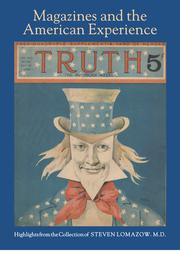 MAGAZINES AND THE AMERICAN EXPERIENCE

Highlights From the Collection of Steven Lomazow, M.D.

An illustrated history focuses on the development of American magazines.

Lomazow knows the American magazine industry from extraordinarily deep experience as a collector. Over the course of a “forty-eight-year odyssey,” he has amassed more than 80,000 magazines, dozens of whose covers are gorgeously displayed in this handsome volume. He perspicuously chronicles the historical arc of the American magazine, beginning with its genesis in the 18th century in Philadelphia, Boston, and New York City and continuing through the Civil War and the Industrial Revolution to its present iterations. The author covers a dizzying swath of territory with remarkable concision, including magazines devoted to literary pursuits, trade, social activism, business, and fashion. The rich historical account that emerges often assumes a quirkily unconventional take—for example, when covering the golden age of magazines (1890 to 1920), Lomazow concentrates on the neglected story of the great proliferation of smaller-market publications: “The era also witnessed the birth of another new magazine genre of cultural importance: the little magazine, a form associated with artistic experimentalism, avant-gardism, and social and political activism.” In fact, while the first half of the book is devoted to a synoptic history, the second half mines the cosmos of these little magazines and the impact they had despite a more limited reach than their better known, mass-market counterparts. The author’s effort doubles as an exhibition catalog—he presented his collection at the Grolier Club in New York City—and a sweeping history, both of which are executed with elegance and intelligence.

Lomazow’s expertise on the subject is inarguably magisterial—he seems equally self-assured opining on the biggest and smallest publications, the shifting sands of copyright law, and the ramifications of the birth of the internet. And since one could hardly furnish a history of the American magazine without some reflection on the circumstances—social, cultural, and political—of its evolution, the work is a wonderfully unusual account of the country’s growth as a whole. Magazines, especially the smaller ones that sometimes remained obscure, embodied the hopes of a nation of readers looking for edification, solidarity, or beauty: “While fast becoming a consumer-oriented nation embracing commercial mass market culture, America was also culturally aspirational. The little magazines serve as a demonstration of how the American entrepreneurial spirit was harnessed in the service of high culture and social progressivism.” While it’s more common to find histories that emphasize the country’s famous commercial spirit and indefatigable productivity, the author illuminates America’s cultural longings with impressive astuteness. In addition, an exhibition catalog is rightly judged by its visual splendor, and on this score, Lomazow deserves kudos—the book is adorned with dozens of stunning photographs, some immediately recognizable as iconic and others tantalizingly esoteric and rare. This is a remarkable history—thoughtful, granularly meticulous, and comprehensive—as well as a visually spectacular showpiece. One needn’t be a magazine collector to thoroughly enjoy this refreshingly original overview of American history.

A delightful combination of historical commentary and beautiful photos.