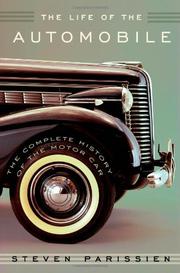 THE LIFE OF THE AUTOMOBILE

The Complete History of the Motor Car

A prominent British historian maps out the tricky, messy, world-changing history of the gas-powered automobile.

In this straightforward history of cars, Parissien (Interiors: The Home Since 1700, 2008, etc.) begins by offering a concise origin story of the birth of the modern car and then launches into the oft-told tales of the slick behemoths who brought the product to the mainstream. “The men who were responsible for the creation and development of the global car industry were, for the most part, enthusiastic experts or fast-talking salesmen—or, like Henry Ford, a bit of both,” writes the author. “Many of the first auto pioneers were larger-than-life characters.” In addition to Ford, Parissien looks at the men who are mostly known as brand names today, including the rakish Louis Chevrolet, the brilliant engineers Karl Benz and Gottlieb Daimler, and the French pioneer Armand Peugeot. Focusing on the characters involved in this great drama would have led to more inspired storytelling, but the historian in the author is far too ingrained. He pulls the focus way back to give an undemanding accounting of the industry’s peaks and valleys and the resulting effects on the social structures of America, Europe and Asia. There are a few entertaining moments—Parissien clearly understands the symbolism of the car as sex symbol—and there are nods to the cults of Volkswagen’s Beetle and the Mini Cooper, as well as well-known iconography like Steve McQueen’s Shelby Mustang in Bullitt, James Bond’s Aston Martin, and the DeLorean DMC-12 and its prominence in the Back to the Future movies. However, the step-by-step narrative, pulled almost entirely from secondary sources, is a grind.

An authoritative but dull chronicle of a colorful industry that leaches out most of the interesting parts of one of the world’s great pastimes.