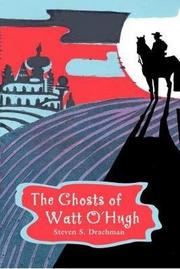 THE GHOSTS OF WATT O'HUGH

On the surface, Watt O’Hugh’s beginnings mirrored many who dwell in a time of poverty and strife. Born in 1842, the young man’s existence could have been chalked up to a textbook stereotype, like a New York City Oliver Twist. Were it not for his special abilities, his could easily have been a story that would fit nicely into a work of prose dashed off by Nathaniel Hawthorne or Ralph Waldo Emerson. O’Hugh’s life veers from normalcy, however, when he learns the ways of magic and embarks on a journey throughout Earth’s history. In a pompous literary world ripe with mundane characters, Drachman pens a standout lead in the character of Watt O’Hugh. The cool hero’s tale is told in charming, romping detail, from the magical adventurer’s poor childhood in the Five Points and the Tomb, to his notorious, gun-toting dalliances in the Wild West and his wilder exploits through time itself. Were it not for a few lurid scenes of romance and a humble allotment of expletives, the book’s first-person narrative would surely win over a younger audience as well. O’Hugh’s singular name, derived from the words “what” and “who,” adds to the character’s simple charm. Time travel proves to be an enduring ingredient for fiction authors; from Diana Gabaldon’s Outlander series and Audrey Niffenegger’s The Time Traveler’s Wife, to Kurt Vonnegut’s Slaughterhouse Five and Stephen King’s The Langoliers, the uses for jumping in and out of the present never fails to develop a story to a slam-bang conclusion. Adding legitimate historical figures, such as the esteemed author Oscar Wilde, to the fictional mix builds levels of believability to the time traveling romp’s fast-paced flavor. While occasionally too expeditious in the telling, this introductory tale of a planned trilogy often has the fleeting pace found in many of the historic Western pulps authored in the 1800s.

Fast-paced, energetic and fun; a dime novel for modern intellectuals.